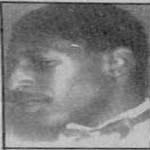 On Sunday, February 9, 1992 at 3:30 am, Police and Rescue were called to the report of gunfire in the parking lot of the Newpoint Shopping Center located in the 500 block of Newtown Road.  Witnesses described seeing a black male about 5’ 10’’ tall, wearing a black leather coat shooting a handgun while standing in front of the Bridge Nightclub.  Jason Walker was driving his red Chevrolet Berretta bearing a Virginia License Plate through the parking lot when his car window was shattered by a projectile striking Jason in the head.  He was taken to the hospital where he died a short time later.  The State Medical Examiner’s Office ruled this death a homicide.
Jason had previously been inside the nightclub watching the Rap Star Doo Doo Brown perform.  He was a United States Marine Corps reservist who was attending Norfolk State University when he was tragically shot and murdered.  He was a 23 year old black male who had brown eyes, black mustache, and black short hair, 6’ 2’’ tall weighing 200 pounds.