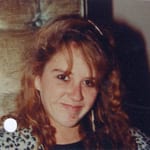 On Wednesday, January 16, 1991, a construction worker discovered a green canvass military style duffle bag lying in a ditch along the 700 block of General Booth Blvd. less than a mile from the Virginia Marine Science Museum which was under construction at the time.  The bag was opened and the gruesome discovery of a human body inside.  The bag and body were transported to the State Medical Examiner’s Office where the death was ruled a homicide.  The body was identified as Karen Ann Wheeler, a 21 year old white female who had blonde dyed hair and blue eyes.  She was described as thin, weighing about 120 pounds.  She had blond hair, blue eyes and was about 5’1’’ tall with a scar on her left hand.
Karen Wheeler had last been seen on November 29, 1990.  She lived and hung out at the oceanfront area of Virginia Beach.