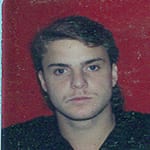 On Sunday, November, 10, 1991, 22 year old Lee Navarro was working at the Zero’s Sub Shop located in the Birchwood Shopping Center at 3760 Virginia Beach Blvd.  He was working alone at the time this murder occurred.  Potential customers entered the sub shop at approximately 7:45 pm finding Mr. Navarro suffering from a gunshot to the chest.  Police and Rescue units responded to the scene.  Rescue transported the victim to Virginia Beach General Hospital where he died from his injury.  Mr. Navarro’s body was transported to the State Medical Examiner’s Office for autopsy.  The manner of death was ruled a homicide.
He was a white male who had brown eyes and a brown hair cut in military style, 5’ 9’’ tall weighing 165 pounds.