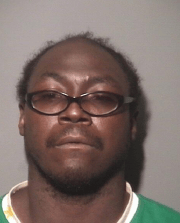 On Tuesday, January 3, 2006 at 8:30 am, a report of gunfire near the intersection of Old Virginia Beach Road and Barberton Drive was reported to the Virginia Beach 9-1-1.  Police responded to the area and found a body of a black male lying in the roadway bleeding.  Paramedics pronounced the victim deceased.  The body was transported to the State Medical Examiner’s Office for autopsy.  The cause of death was due to a gunshot wound and the manner of death a homicide.
Investigators were able to identify the victim of this murder as Shawn Gary John, a 34 year old who lived near the area of this murder.  He was a black male who had brown eyes, black receding hair, 5’ 10’’ tall, and 190 pounds.  He wore prescription glasses.