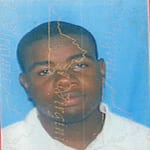 On Friday, November 9, 2001 at approximately 2:08 am, 20 year old Zedric Daniels was sitting in a friend’s vehicle when he was shot in the head.  The car was parked out front of the Holiday Inn located at 5655 Greenwich Road.  Mr. Daniels’ friend and driver of the car were inside the motel when he heard a gunshot outside.  He ran outside to the car where he found Zedric bleeding from his head.  Police and Rescue responded and found Zedric deceased.  His body was transported to the State Medical Examiner’s Office where the autopsy revealed a gunshot wound to the head was the cause of death and the manner a homicide.
Zedric was a 20 year old black male, who had brown eyes, black hair with small braids, goatee , and he stood 5’ 7’’ tall weighing 128 pounds with a thin build.